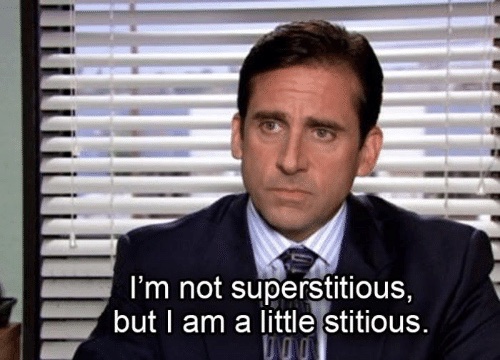 I would contend that October is probably one of the best sports months there is, followed closely by February and March (Super Bowl and March Madness). October has pretty much everything though; Football (both NFL and college) is in full swing, MLS playoffs are getting underway, NHL is back, the NASCAR playoffs, and of course, the one and only MLB playoffs and World Series.

Now, if you know me or you’ve read my previous articles (What UVA Basketball and Having SMA Have In Common), you know that I’m a sports fan and you might have some idea of which teams I like. However, if you go and look at my Facebook posts, tweets, or Instagram feed you’ll find very little evidence that I even like sports, much less what team I like…

A few years ago I started to notice something strange. I should start off by saying that I’m not a huge trash talker. I’ll engage in the occasional banter, and I must admit that I can’t resist taking part in some good Redskins, Patriots, Hokies, Nationals, or Yankees bashing. I prefer to let my teams do the talking though. So, when I’d post on social media about sports, I mostly just posted things like “Jack & Coke and Cowboys vs. Redskins, doesn’t get much better! #GoCowboys #AmericasTeam.” Not the most searing roast, right? Here’s where the strange part comes in…

every time I posted about one of my teams, they lost!

At first, when I was being a bit more bold about my trash talk, I thought maybe it was some kind of karma or something… I don’t really believe in karma but, you know…

So I dialed back the smack talk a bit and just posted things like the example above. Yet still, every time I posted about one of my teams, even if the game was half over and they were ahead, they’d somehow lose in spectacular fashion.

After this pattern continued, I started just posting the “watching” activity on Facebook with whatever game I was watching but still, they continued losing.

I can already hear the haters.

I can probably even tell you their names. They’ll be saying, “maybe you just like horrible teams? Huh-huh.” I get it. If a Virginia Tech fan was saying this to me I’d probably take the opportunity to say the same thing. It’d happen to be true in that case but… Here’s the thing, when I stopped posting about them, they started winning again!

I wrote my first article for this website about UVA’s historic loss in the first game of the 2017-18 NCAA Tournament, and their historic comeback to win the NCAA Tournament the very next year, and how that mirrors life. That whole 17-18 season I didn’t post a single post about how well the Cavaliers were doing… until it was time for March Madness.

One of my favorite things come March, besides my mom’s birthday of course, is filling out a bracket. I usually try to be pretty realistic and avoid just picking my team to go all the way. That year though, I put Virginia all the way through. It wasn’t an unpopular pick. They had a real chance of winning. But then, I did something I hadn’t all year. I posted the picture of my bracket and said “#GoHoos.” We all know what happened next.

This season, when they won the National Championship, I posted nothing about UVA and when I filled out my bracket, all of my brackets, I picked teams besides UVA to win it all… even though deep down I knew they would.

I know all of this sounds a bit crazy.

I wouldn’t say that I’m really a superstitious person. If we’re being honest -which we are, otherwise what’s the point of doing this whole website- I think all that stuff is a bit dumb. However, there is an unexplainable, undeniable correlation between me posting about my teams and them losing.

So, as we go through the next few months, and the various points throughout various sports seasons, you’ll see my social media stay deathly quiet when it comes to sports. You might have the inclination to start thinking I’ve abandoned my teams or something like that. In fact it will be just the opposite. Though my feed will stay silent, and I’ll be mustering every ounce of effort to keep it that way, I’m cheering harder and louder than ever on the inside.

…And if you need any more proof of my theory, I submit this very article as evidence. I started writing this article the night before the Braves played the Cardinals in game 5 of the NLDS. I’m finishing it, stunned and silent, after the Braves just lost spectacularly 13-1 with the Cards scoring 10 runs in the first inning. Coincidence? You decide.

Well, those are my remARCs. I hope they in some way, big or small, might have resonated with you. Whether it made you laugh, cry (I hope not too much), smile, or maybe think about life from a different perspective, I hope you take something away from this article that makes your day even the slightest bit better. I’d love to hear your remARCs as well. Feel free to send me an email at myremarcs@comcast.com, or leave a comment on the My RemARCs Facebook, Twitter, or Instagram pages… unless you hated it. In which case, why are you even still reading this? Hope to see you back here soon. Until then, be well and live remARCably.